The Santander Autogrill case: The end of round 1 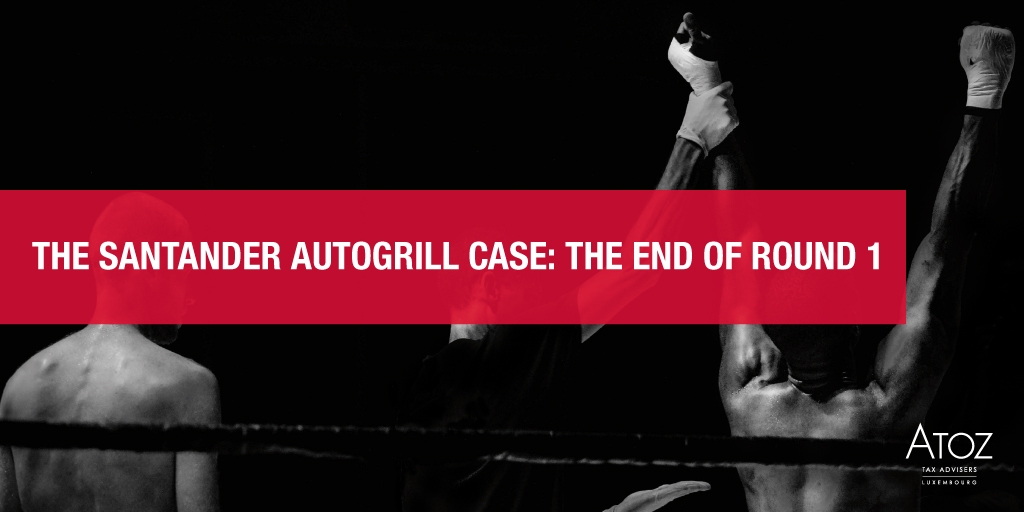 What do a bank and a duty free shopping group have in common? Answer: they both invested abroad.

In itself, hardly noteworthy, but in this case, these 2 Spanish companies benefitted from a specific Spanish tax provision allowing the tax write off of goodwill on acquisitions of foreign subsidiaries. The EU Commission challenged this on the basis that it constituted illegal State Aid and litigation ensued. The procedure started in October 2007 and has been running ever since. A General Court (“GC”, the lower European court) decision in November 2014 that was taxpayer and Member State-friendly was overturned today by the European Court of Justice (ECJ, the supreme European court).

On the technical aspects of the case, at first glance:

Symbolically, the case may be seen as a victory for the Commission and a defeat for taxpayers and Member States; however it is better to see it as a step in the process.

While as lawyers and tax advisers, we can delight in the intellectual intricacies of selectivity, comparability etc, there is an underlying unease around the impact on businesses.

Simply put, at present we have an EU legal framework that identifies any distinction in a tax system as being potentially illegal state aid. This distinction can be either a legal provision (such is the case for Santander/ Autogrill) or an application of a legal provision (Apple, Starbucks, etc). If the legal definition is this wide, then potentially there are an almost infinite number of State Aid cases outstanding. The financial consequences only become relevant when the Commission chooses to pursue a case, however. So far, the choices seem to have been at least partly politically motivated. To illustrate this, one only has to recall the spectacle of the Commissioner, after being accused of anti-US bias, conveniently announcing while in Washington DC that a European MNE was being pursued.

While some tax regimes or practices of the past might be questionable by today’s standards, the means of dealing with them is questionable. Using State Aid (a competition law measure), as opposed to discrimination cases (a tool available to taxpayers that really do suffer a competitive disadvantage), the Code of Conduct (a political tool used by member States) or specific BEPS-inspired legal changes (such as the “ATAD” directive) created a host of problems. As long as State Aid is used as a catch-all technique to manage more political subjects (tax competition between States) as opposed to distortions of competition between companies (for which State Aid was designed), an environment of uncertainty will persist which is not conducive to business confidence.  Businesses have to deal with a 10-year tail risk on which there is no clarity. The consequences are the repayment of the tax benefits received for up to 10 years, retroactively, plus interest.

Nearly 10 years into the Santander / Autogrill procedure, we have an ECJ decision that decides the case needs to be re-heard in the lower court, with a possible appeal back to the ECJ. Years more of uncertainty await. At some point, the EU institutional framework will have to be adapted to deal with this.

It was interesting that the ramifications of the case have caught the attention of a number of governments. Spain was joined by Ireland and Germany in arguing that no State Aid existed. While it is not unusual to have State filing briefs in support of another government to argue against having to refund taxes (common in tax discrimination cases), it is paradoxical to see States lining up to argue against having to collect more tax. The reason isn’t hard to find. An unlimited application of the State Aid doctrine in tax matters may severely limit member’s sovereignty in tax matters, creating an uncomfortable tension in the triangular relationship between Member States, the Commission and the ECJ.

Impact on other cases

At first glance, the case shuts one avenue of escape for taxpayers and Member States, however it leaves a number of open questions in the particular case of Santander and more generally.  The Santander case dealt with a specific legal provision, whereas some of the more recent high profile cases deal with the individual application of (uncontested) law to a particular fact pattern ( in particular to transfer pricing matters). One consequence of a very wide view of State Aid is that every individual tax authority decision would become “selective”, leading to an almost infinite number of State Aid cases (each APA, each assessment, …).  At some point, clarity will be needed to make sure that the triangular relationship does not become a kind of Bermuda triangle for taxpayers.

Haste makes waste: Why the European directive proposal for a digital sales tax should be thrown out

The ideal investment platform for a new and hungry market