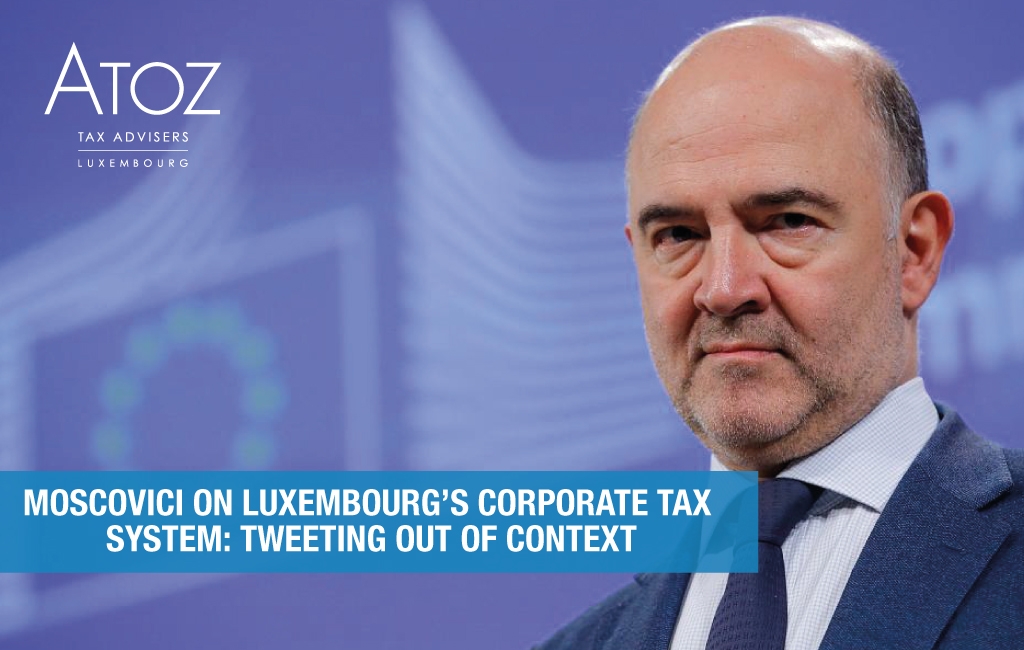 We probably need to get used to politicians using Twitter as a communication channel, discussing highly complicated topics in a very simplified manner within a 140 character limit (recently increased to 280 characters). However, using Twitter entails the risk that messages are misunderstood or taken out of context.

On 7 March 2018, the EU Commission released its annual analysis of the economic and social situation in EU Member States. The different country reports largely focus on the economic situation of the Member States, progress made in regard to country-specific recommendations and an overview of future reform priorities. The 60 page Luxembourg country report included less than 1 page on corporate tax matters and 1 paragraph on suggesting that the country could be used for aggressive tax planning. So far, so good.

On the day of the release of the reports, Pierre Moscovici, the European finance commissioner, wrote on Twitter, “The @EU_Commission is today stressing the issue of aggressive tax planning in seven EU countries: #Belgium, #Cyprus, #Hungary, #Ireland, #Luxembourg, #Malta and The #Netherlands. #FairTaxation.” In a second Tweet, the commissioner wrote, “These practices have the potential to undermine fairness and the level playing field in our internal market, and they increase the burden on EU taxpayers. The related country reports presented today are based on a thorough review of their tax rules& relevant economic indicators” (emphasis added).

There seems to be a curious focus on a very small part of the Commission’s own report. In addition, this blog demonstrates that the accusations made by the EU Commission are unjustified for the reasons set out below.

Success as an indicator of abuse?

Luxembourg is a prime holding location and a large financial centre that features a major fund industry. Luxembourg is the location of choice of international investors, asset managers and multinational enterprises alike. This is because of the country’s diverse and flexible legal and regulatory environment, the existence of qualified, multilingual workforce, lender and investor familiarity with the jurisdiction, political stability and the central location within Europe to name a few reasons.

The report of the Commission vaguely speculates that Luxembourg’s high inward and outward FDI stocks can only be partly explained by real economic activities taking place in Luxembourg. The report further states that the high level of dividend, interest and royalty payments as percentage of GDP suggest that the country’s tax rules are used by companies that engage in aggressive tax planning.

As such, it appears fairly unscientific to conclude that a country that is successful in attracting foreign investments must engage in abusive practices. Looking at the facts, Luxembourg is frequently used for structuring investments in and through Europe. Here, Luxembourg companies are operating as European investment platforms, holding participations, providing financing to the operating businesses, managing intangible property and performing diverse functions in relation to the management of these activities. It is undisputed that investment activities and asset management are legitimate business activities.

Therefore, it is not surprising that significant investments are made in Luxembourg which result in the payment of quite substantial amounts of dividends, interest and royalty payments to Luxembourg companies. Fortunately, in the European internal market taxpayers are free to rely on the freedom of establishment when choosing a jurisdiction to establish their business activities.

Absence of withholding tax on interest and royalties

According to the report, the absence of withholding taxes on interest and royalty payments under Luxembourg tax law may facilitate aggressive tax planning. However, a number of countries including Germany and France do not levy withholding tax on interest payments.

It follows that in practice there could only be few circumstances in which withholding taxes provided under domestic tax law could be levied. So, how can the absence of withholding taxes under Luxembourg tax law be problematic at all?

The report continues to point out that “there may be an exemption from withholding tax on dividends paid to a company resident in a country that has a bilateral tax treaty with Luxembourg and is fully subject to an income tax comparable to the Luxembourg corporate income tax”. Indeed, corporate shareholders of Luxembourg companies may benefit from a dividend withholding tax exemption if they satisfy the comparable tax test and met certain conditions (i.e. minimum shareholding and holding period).

As a matter of principle, some EU countries do not levy withholding tax on dividends which is a legitimate choice that countries can make when exercising their sovereignty in tax matters. In an EU context, the EU Parent/Subsidiary Directive restricts EU Member States in their right to levy withholding tax on dividend payments. On the website of the EU, one may read that this “Directive was designed to eliminate tax obstacles in the area of profit distributions between groups of companies in the EU by abolishing withholding taxes on payments of dividends between associated companies of different Member States and preventing double taxation of parent companies on the profits of their subsidiaries”.

Some EU Member States implemented severe anti-abuse legislation that would disallow the application of the withholding tax exemption on dividends provided under the EU Parent/Subsidiary Directive. In a decision of the Court of Justice of the European Union (CJEU) held on 7 September 2017, the court decided that a French anti-abuse provision (broadly similar to the principal purposes test under the 2017 version of the OECD Model Tax Convention) aiming at denying the benefits provided under the EU Parent/Subsidiary Directive was inconsistent with EU Law, re-emphasizing its “wholly artificial arrangement” doctrine. On 20 December 2017, the CJEU decided that German anti-abuse legislation targeting directive and tax treaty shopping was incompatible with EU Law, confirming that, in an EU context, anti-abuse provisions have to be targeted at wholly artificial arrangements.

The importance of this CJEU case law is immense as it has a signal effect for national courts across Europe that have until today not deviated from the “wholly artificially arrangement” doctrine laid down by the CJEU. It is interesting to note that there are a number of other cases regarding anti-abuse legislation before the CJEU which is more and more becoming an anchor or reasonableness at a time where political forces do not know or do not want to accept the limits set by EU Law.

Over the years, most EU Member States implemented IP regimes to foster research and development activities in their territory. The way the different IP regimes have been designed varied from one another, providing for reduced tax rates, tax credits, special deductions or other incentives.

In 2008, Luxembourg implemented an IP regime in order to spearhead Europe’s envisioned knowledge-based economy that has been agreed by the European Council in 2000 in Lisbon. During an EcoFin meeting held on 2 December 2008, it has been explicitly stated that the Luxembourg IP regime did not fall within the ambit of the EU Code of Conduct (measures to combat EU harmful tax competition).

During the OECD Base Erosion and Profit Shifting (BEPS) Project, IP regimes have been in the focus of Action 5. The outcome of Action 5 was the so-called “modified nexus approach” that requires benefits under IP regimes only to be granted to companies that perform themselves the R&D work with limited possibilities to outsource some R&D work to other group companies. It is not free of doubt whether the modified nexus approach is consistent with the fundamental freedoms provided under EU Law.

Nevertheless, the Luxembourg legislator adhered to the commitments made under Action 5 and abolished the former IP regime and introduced a new IP regime that is consistent with the modified nexus approach.

In the past, EU Directives relating to tax matters aimed at harmonizing EU tax rules in a way that would reduce impediments within the EU internal market through the elimination of withholding taxes, the exemption of dividend income or ensuring tax neutrality in case of mergers. The common objective of these initiatives was to encourage cross-border trade and investments that is positive for European economies. However, it seems that the European agenda has changed since this time.

The ATADs go beyond the minimum standard defined by the OECD, gold plating the BEPS recommendations in the Final Reports released in October 2015. For example, the interest deduction limitation rules and the CFC rules have been mere recommendations for countries that would like to implement such rules. The purpose of these Directives is obviously a harmonization of the different European corporate tax systems with a view to reduce tax competition within the European Union. It is questionable whether this strategy will be favourable for Europe considering reverse movements in other parts of the world such as the US that once more inflamed tax competition through the recent tax reform.

In any case, like all EU Member States, Luxembourg will have to transpose the provisions of the Anti-Tax Avoidance Directives into domestic tax law by 2019 and 2020, respectively.

The accusations made in the EU Commission’s country report on Luxembourg speculate about the success of Luxembourg in attracting foreign investments and turn around (the absence of) withholding taxes on dividend, interest and royalty payments. Ironically, the elimination of withholding taxes on such payments is the subject matter of two major EU Directives.

As elaborated above, these accusations are misrepresentations that do not satisfy the reality test. Over the last years, Luxembourg has done a great effort to adhere to all European and international tax and transparency standards, contributing to a level-playing field in international tax. Yet, politicians continue to target Luxembourg for no reason.

This time the political leaders of the 7 EU Member States that have been blamed for their tax rules have been strongly opposing against the accusations of Mr. Moscovici, the European finance commissioner. Unfortunately, it takes more than a tweet to disprove accusations in regard to complex tax matters. Hence, what will likely remain are the “Alternative Facts”.