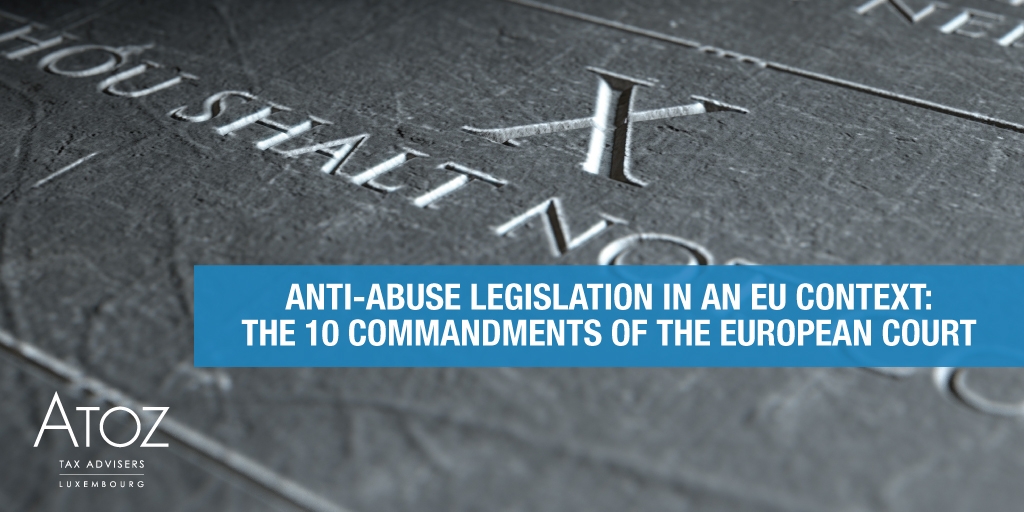 Over the past few years, several EU Member States have implemented a variety of anti-abuse legislation – including anti-Directive/anti-Treaty shopping rules, controlled foreign company (CFC) rules, general anti-abuse rules (GAAR) and specific anti-avoidance rules (SAAR) – to protect their own tax base against erosion. Far from being uniform, the way anti-abuse legislation is designed varies from one state to another and may be rather restrictive or broad in its scope of application.

The European Anti-Tax Avoidance Directive (ATAD) will require EU Member States to implement certain BEPS measures including several anti-abuse provisions such as a CFC rule and a GAAR. These rules need to be implemented as from 1 January 2019. In addition, a principal purpose test (PPT) and potentially other anti-abuse provisions will be included in tax treaties through the multilateral instrument (MLI) which has been developed as part of the BEPS Project for implementing BEPS measures in bilateral tax treaties.

Another important aspect in this respect is the stance of the tax authorities when interpreting anti-abuse provisions. Here, the attitude of the tax authorities of some European countries towards taxpayers could be seen as aggressive, challenging legitimate business transactions for no good reason. These tendencies have been aggravated by the OECD Base Erosion and Profit Shifting (BEPS) Project, creating significant legal uncertainty for cross-border trade and investment.

However, in two major decisions in 2017, the Court of Justice of the European Union (CJEU) defined clear criteria that need to be adhered to when designing and interpreting anti-abuse legislation in an EU context. We’ve rewritten these criteria as 10 commandments that we hope Tax Authorities will follow:

Taxpayers are free to rely on their fundamental EU freedoms when structuring investments and “tax jurisdiction shopping” is a legitimate activity in an internal market even if the choice of the jurisdiction is principally based on tax considerations.

In an EU context, the CJEU requires anti-abuse legislation to focus on “wholly artificial arrangements” which do not reflect economic reality and whose purpose is to unduly obtain a tax advantage. Thus, tax authorities should not automatically consider the presence of abuse or fraud.

3. Thou shalt analyse on a case-by-case basis

4. Thou shalt conduct a substance test

An abusive situation may only exist in the absence of an “actual establishment” in the host state (for example, premises, staff, facilities and equipment) and a “genuine economic activity” performed by the foreign company.

As regards the existence of an actual establishment, the CJEU does not seem to require an extensive level of substance. As a rule of thumb, the substance should be appropriate for the activities performed by the company.

5. Thou shalt consider the circumstances of the entire group

When analysing the substance of a company, it is necessary to not only analyse the situation of the entity as such but also that of the group as a whole. Here, it may even apply if a company relies on the staff and premises of other group companies in the same jurisdiction.

6. Thou shalt have broad understanding of economic activity

The notion of “genuine economic activity” should be understood in a very broad manner and may include the simple exploitation of assets such as shareholdings, receivables and intangibles for the purpose of deriving what is often described as “passive” income. The nature of the activity should not be compromised if such passive income is principally sourced outside the host state of the entity.

In addition, no specific ties or connections between the economic activity assigned to the foreign entity and the territory of the host state of that entity can be required by domestic anti-abuse provisions. Therefore, insofar as the EU internal market is concerned, the mere fact that an intermediary company is “active” in conducting the functions and assets allocated to it (rather than being just a letterbox company) should suffice to remain out of the scope of domestic anti-abuse legislation or the PPT in tax treaties concluded between EU Member States.

7. Thou shalt not conduct a motive test

An abusive situation does not depend only on the intention of the taxpayer to obtain tax benefits (i.e. a motive test) but requires the existence (or absence) of certain objective factors including an “actual establishment” in the host state and the performance of a “genuine economic activity”.

8. Thou shalt leave the possibility to rebut a presumption of abuse or fraud

Anti-abuse legislation should not establish an irrebuttable presumption of fraud or abuse. Instead, the taxpayer must have the possibility to provide evidence to demonstrate the appropriateness of the structure.

9. Thou shalt not differentiate on grounds of the shareholder of a parent company

The imposition of a general tax measure automatically excluding certain categories of taxable persons from the tax advantage, without the tax authorities being required to provide even prima facie evidence of fraud and abuse goes beyond what is necessary to prevent fraud and abuse. Accordingly, as long as the foreign company has appropriate substance, the nature (corporates vs. individuals), origin or tax status of their shareholder(s) should have no bearing on the application of anti-abuse legislation.

10. Thou shalt respect the principle of proportionality

The objective of combating tax evasion and avoidance and that of safeguarding a balanced allocation of taxation powers between the Member States cannot justify an impediment to the freedom of establishment.

The international tax landscape provides for increasingly more anti-abuse legislation resulting in massive legal uncertainty as to the tax treatment of cross-border trade and investment. However, through its recent case law, the CJEU has placed strict limits on the design and interpretation of anti-abuse legislation in an EU context. These criteria should likewise apply to provisions under domestic tax law and to tax treaties concluded between EU Member States.

The ultimate take away here is that the Court has made a valuable contribution to legal certainty in the post-BEPS era which is good news for all international business activities.

Haste makes waste: Why the European directive proposal for a digital sales tax should be thrown out

The ideal investment platform for a new and hungry market