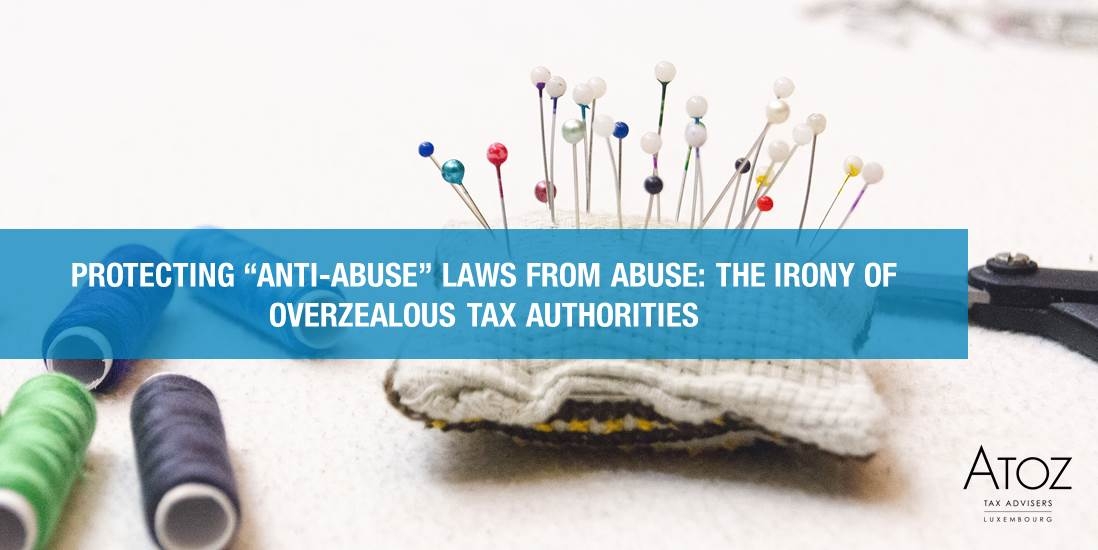 A little bit of background

Over the course of the last few years, interest in the field of international taxation has grown steadily. The topic has found its way into the heart of public debate where it is often subjected to oversimplification and political spin. Objective technical and legal analysis is rarely considered worthy to explain, too complex, too complicated for the layman to grasp (or maybe too dry), and so the topic is filtered through concepts of fairness and morality in order to give it mass appeal.

Seemingly in response to society’s increased appetite for “tax justice”, the EU Commission has amplified its activity, publicly denouncing a number of tax practices it perceived as illegal State Aid and quickly introducing sweeping legislative actions aimed at tacking this perceived abuse. EU Member States have just as swiftly adopted these new provisions and directives in an effort to address the issue.

However, this context created unprecedented levels of legal uncertainty for investors. A striking example of this would be the withholding tax exemption on dividends in the frame of the Parent Subsidiary Directive. In this case, certain Member States have seemed to apply presumptions of the artificial character of investment structures to consider the scheme abusive, disallowing the withholding tax exemption on certain dividend distributions.

As a consequence, private equity and real estate investors in particular are subjected to an increase in hoops to jump through when structuring their European acquisitions. Another negative consequence for would-be investors: uncertainty and risk surrounding the tax treatment of future expected dividends.

In this context, Advocate General Kokott of the Court of Justice of the European Union (ECJ) issued on 19 January 2017 an interesting reminder in its opinion in the case Eqiom v. Ministre des finances et des comptes publics (Case C-6/16), considering that it not acceptable for a Member State (in the case at hand, France) to presume a structure as abusive without reasonable evidence.

A quick summary of the case

As per article 119ter, paragraph 3 of the French Code Général des Impôts (CGI), a dividend distribution performed by a French company to its European company should not be exempt from French withholding tax provided that the European parent company is directly or indirectly controlled by one or several non-European residents, except if it can be justified that the main purpose or one of the main purposes of the chain of participations is not only to benefit from the exemption.

In applying this provision, the tax authorities refused to apply the Parent-Subsidiary Directive privilege to the dividends paid by a French resident company to its Luxembourg parent company. The Luxembourg resident company was in turn indirectly controlled by a company that had its seat in Switzerland and the proof required by the authorities - namely that the principal purpose behind the structure of the chain of interests was not tax-related - had not been adduced.

In this context, a preliminary question was raised to the ECJ to determine whether the French provision is compatible with the Parent-Subsidiary Directive.

“In regard to the provisions prohibiting abuse, the principle of legal certainty in particular also requires this. If, in terms of form, an individual meets all the conditions for claiming a right, this right may be denied on grounds of abuse only in particular cases.”

As a consequence of the French provision, the mere fact the company receiving the dividend was directly or indirectly controlled by non-European residents gave rise to the presumption of an abuse. This in turn resulted in a shift of the burden of proof from the tax administration to the tax payer who has to provide convincing evidence that the chain of interests is not artificial and driven by tax purposes.

According to the Advocate General, “such an approach goes beyond what is required to prevent tax evasion and is no longer within the limits of what is permissible under Article 1(2) of the Parent-Subsidiary Directive”.

“The refusal to grant an exemption from withholding tax is therefore based on a general presumption that this will involve tax evasion. Such a presumption is not permissible, however. There always needs to be a test of the objective and verifiable facts of the specific case.”

The Advocate General then concludes that “Article 1(2) of Council Directive 90/435/EEC and Article 43 EC in conjunction with Article 48 EC preclude a Member State rule that imposes on a non-resident company directly or indirectly controlled by persons resident in a non-member State the burden of proving, for the granting of an exemption from withholding tax under Article 5 of the Parent-Subsidiary Directive, that the reasons for the structuring of the chain of interests are not tax-based, without the authorities being obliged to provide sufficient indications of wholly artificial arrangements which do not reflect economic reality and whose purpose is to obtain a tax advantage.”

Why is this an interesting stepstone?

In a global climate of public outcry and activism, governments are eager to appease their constituents and show that legislation has teeth. However, national lawmakers, tax authorities as well as taxpayers need to keep in mind that the principle of proportionality and the legal framework must be respected even when trying to tackle abusive structures. It will therefore be interesting to see what the ECJ has to say in its final decision in light of the current application of domestic anti-abuse provisions by certain European tax authorities.

It is in the best interest of the European Union to remain attractive to international investors, and all modern economists agree that both tax and legal certainty play an important role in pursuing this goal.

Although not binding to the ECJ, the conclusions of the Advocate General are a much welcome signal that legitimate investment structures in Europe should not be subject to undue limitations of the dividend withholding tax exemption under the Parent-Subsidiary Directive solely on the basis of the location of their ultimate beneficiaries, and that there should be no presumption of abuse without objective facts leading to clear indications that a structure may be artificial.