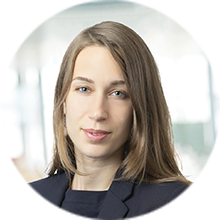 
Diana is a Principal in the Asset Management Advisory department at ATOZ.

A professional in her field since 2013, Diana advises institutional clients and managers on the structuring and setting-up of regulated and unregulated alternative investment funds as well as regulatory matters and general corporate law.

In 2018 Diana Tóth was seconded to the European Investment Fund (EIF) for 6 months where she advised and assisted the EIF in its legal negotiations with fund managers.

Diana Tóth holds a master’s degree in international trade law from the Université Paris I Panthéon-Sorbonne (France) and a postgraduate diploma in laws in commercial and corporate law from Queen Mary University of London (United Kingdom).

Before joining ATOZ, Diana was a member of the Paris Bar.